Home Uncategorized How the Sagrada Família in Barcelona will look once completed? Antoni Gaudí’s Sagrada Familia basilica in Barcelona has entered its final phase of construction and is scheduled for completion in 2026.

La Sagrada Família‘s final stages take shape before your eyes! This animation was made combining helicopter footage with computer animation,Play the video below and enjoy!

The Sagrada Família is a one-of-a-kind temple, for its origins, foundation and purpose. Fruit of the work of genius architect Antoni Gaudí, the project was promoted by the people for the people. Five generations now have watched the Temple progress in Barcelona. Today, more than 135 years after the laying of the cornerstone, construction continues on the Basilica and is expected to be completed in 2026. (Info: Sagradafamilia.org)

Ahead of his time, unique. A man of faith, observer of nature and genius architect, Antoni Gaudí has become a universal figure in modern architecture. His contribution to this discipline broke all the established rules. With never-before-seen building and structural systems, he created his own unique, unprecedented methodology and a style suffused with symbolism with the utmost care in every detail, showing his love of artisan trades. (Info: Sagradafamilia.org) 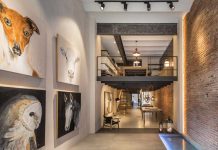 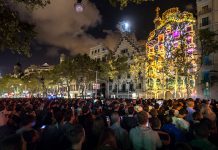 “The Awakening of Casa Batlló”. 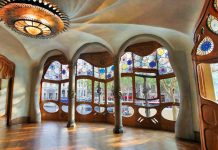