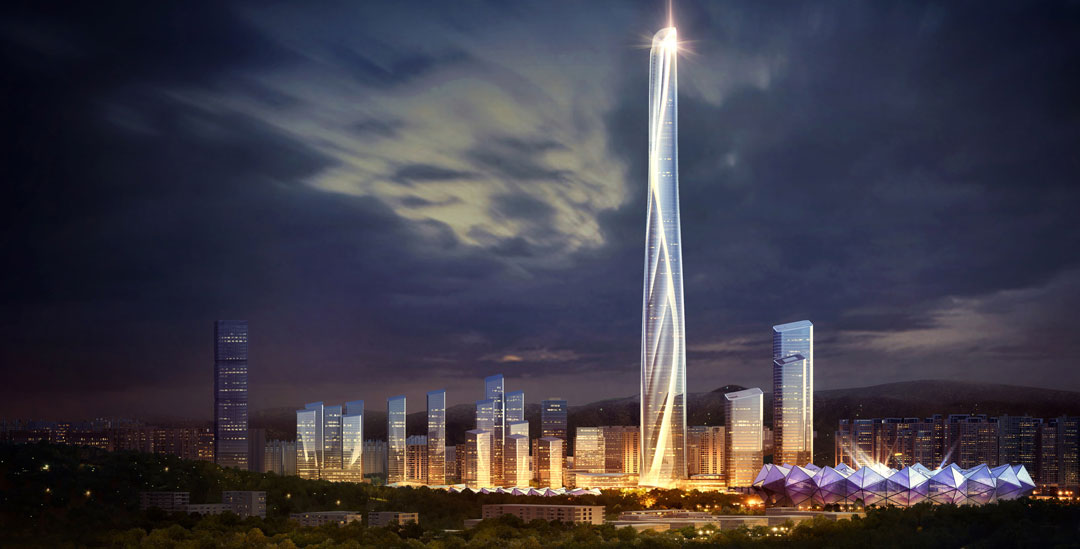 Adrian Smith + Gordon Gill have recently unveiled the design for China’s biggest skyscraper and the world’s third tallest once completed, behind SOM’s 828-meter Burj Khalifa in Dubai and the 1,000 meter high Jeddah Tower, which is currently under construction in Saudi Arabia.

Named the Shenzhen-Hong Kong International Center, it will be a 700-meter tall glass tower in Shenzhen, China, set between the foothills of Longcheng Park and Dayun National Park. It will defeat Shanghai Tower, designed by Gensler, which is the current tallest tower in China, with just over 2,000 feet tall.

AS + GG are well known for working on many of the world’s tallest buildings and this one is no exception. The Shenzhen-Hong Kong International Center is tall enough to exceed the supertall tower range (which ranges from 984 feet to 1,969 feet), and will now be considered megatall, whose first member was Burj Khalifa in 2010.

The building shows to be a twisted skyscraper with an anthropomorphic form. It will house one of the world’s highest observation decks, alongside a restaurant, night club, spa facilities and a swimming pool.

High-performance glass will be used to reduce heat gain, while the entire development will be orientated to optimize solar gain and natural ventilation.

Also, strategic natural lighting will be used for the interior spaces to increase human comfort levels, and the development was designed so that winds predominantly from the east and northeast are funneled into the open spaces to provide natural ventilation throughout the site and improve outdoor thermal comfort.

A large public transportation centre and bus terminal has also been incorporated by the architects into the tower’s master plan.