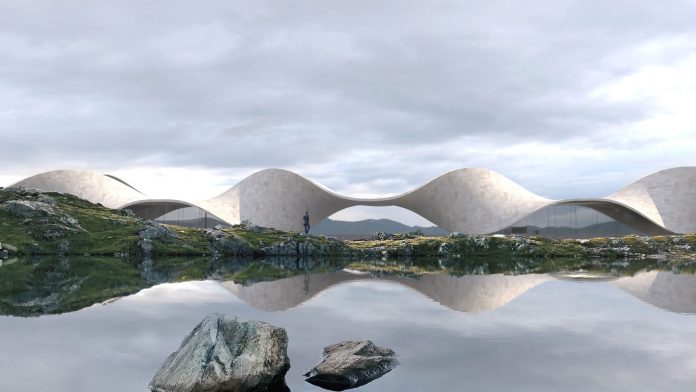 Designer Antony Gibbon has envisioned a new form of sculptural exploration in the project “Twine”. It’s a monumental structure characterized by its main use of twisted concrete, making it appear as a soft material, rather than the rough texture that it really is. Gibbon conceived Twine as a twisting concrete structure, which reflects the hills surrounding as a “series of organic forms”.

The designer makes use of undulating surfaces that appear to peel up from the ground and then twist in the skies, which is where the structure takes its name from. “Twine” means to twist strands of material together, or to wind round something.

The structure is envisioned as two residential areas, containing bedrooms, a kitchen lounge and an exterior space. This terrace has a sunken circular seating area, which faces into a fire pit.

Triangular openings that perforate the concrete in a rip-like manner form the entrances to both parts of the longitudinal house. On the roof, Gibbon conceived a terrace with a spa and hot tub, accessed via a staircase from one wing of the house which leads to the central terrace.

Gibbon’s idea of creating a design of mainly twists and curves comes from his desire to make it visually interesting to the human eye. “The movement in the shape is measured purely in its form and function, aesthetically as well as practically,” explained the artist, “Each twist/bend creates the structural support to the ground allowing the internal spaces for the glass walls and interior.”

Antony Gibbon’s structure introduces a new topography with its organic surfaces, although the project intentionally exhibits a physical disconnection from the landscape. Considering the designers vision of the sculpture situated on a ground plane, and then extends to the distant hills, it is suggested that the concept is an aesthetic distancing of nature, where the green and natural environment do not create a connection with the architecture, but instead is left to be admired.

“The space becomes a playground with the architectural spaces formed from the twisting sculptural form,” explained Antony, “It needs to be situated in the rustic nature to give the balance to the strong form”. 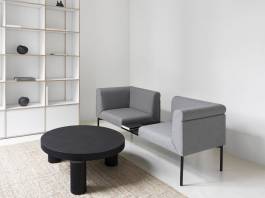 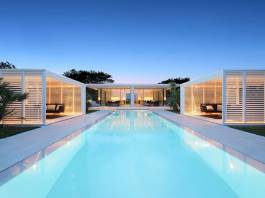 Seaside Home Break up in Half for Two Brothers