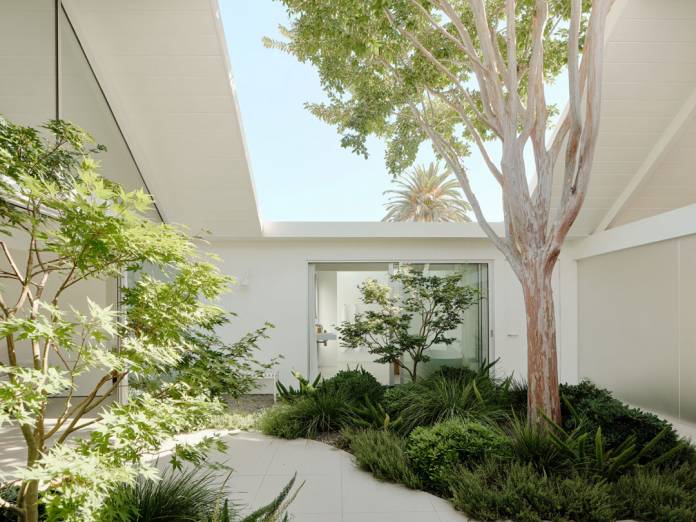 This renovated l Eichler Plan OJ-1605 home in Silicon Valley was originally designed by A. Quincy Jones and Frederick Emmons in 1962.

Now named The Twin Gable House and redesigned by Ryan Leidner Architecture, it has a central open-air atrium that can be viewed from almost any room.

Once you enter the Eichler property, the first area you see is the signature atrium and almost every room in the house opens up to the outside.

Isabelle Olson and Matthaeus Krenn, the owners and designers, were fans of the original design of the house.

However, they redesigned it in order to create a more modern project, while also making the space more energy efficient.

The designers wanted to create a more open and modern layout, while still emphasizing the important details of the original plan.

To achieve this, Ryan Leidner Architecture removed certain walls and replaced them with sliding glass doors on the rear façade, creating a more seamless and open look, with a view to the backyard and the new pool.

Plans for this project were focused on returning the home to its original state, despite the many renovations that had taken place over the years.

After the transformation, the open space concept resulted increasing the abundance of natural light, creating a mostly bright room and making the space appear larger than it actually is.

Porcelain tiles are the main floor material of the house and are used both outdoors and indoors to achieve a seamless flow. TIPS for choosing the PERFECT color palette for your home!